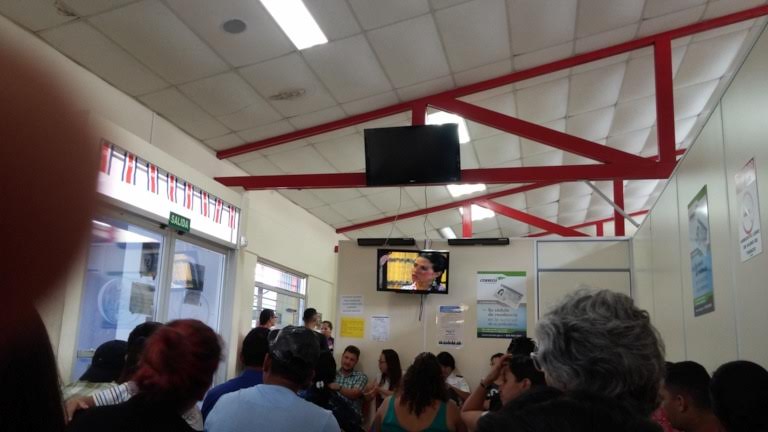 So the day of our final appointment finally came, and we got up at 5:30am which is about 3 hours earlier than we usually get up and we got ready to go to San Jose by bus where our attorney's assistant would pick us up and take us to our appointment with Migracion.

I refuse to drive to or in San Jose so we took the bus. (People drive like maniacs in San Jose, pedestrians walk right in front of you out of nowhere, people run red lights, etc; it's crazy! So I take the bus...) We got to the bus station as the bus literally was pulling out. Waited about 20 min. for the next one... and got to San Jose on time. Our Costa Rica residency final appointment was now just an hour or so away!

The attorney's assistant,  picked us up and took us to the Immigration building and we got there about 45 min. early.

She gave us the documents we needed, and led us by the hand to our appointment, even got us in ahead of other people in line (having an attorney with friends there is the key apparently). "Here we are," I thought excitedly. "Just minutes away from our dream of Costa Rica Residency!"

But then we had to wait nearly an hour and a half past our appointment so all in all we were waiting there well over 2 hours. Ugh!

The typical hard uncomfortable chairs, an uncomfortable room, kids and babies making kid and baby noise, and announcements being made constantly - about every 30-60 seconds - so you can't relax and "do" anything, you have to pay constant attention to each announcement as they call names and say which window to go to.Here's what made our final appointment for our residency in Costa Rica very stressful for me:

So I not only had trouble hearing the names but even if I heard my name I might not recognize it as my name!

So as time went on and on (and on... and on...) without them calling us, I began to think "Oh my God, what if they called us for our appointment already and we didn't hear it or understand it? How horrible would it be if after waiting 6 months for our Costa Rica residency, we didn't get it simply because we couldn't hear our name being called?!

Anyway after around 2 hours they did call my name and actually pronounced it correctly! Miracle!

We got a young guy for our official paper-pusher who was actually very nice, asked us NO questions, asked for only the documents we expected him to ask for, and he just sat quietly and processed our paperwork for 15 min or so, took the official photos of us, had us sign our names electronically for the ID that we will get, and that was that. Costa Rica Residency at last!

So aside from the too-long wait and stress of not being able to hear and understand the announcements well, it wasn't too bad at all. Could've been worse for sure.

They asked us if we wanted to wait for our Costa Rica residency ID's - about 20-45 min - and I said "No thank you, please mail them to us." One thing I've learned about Costa Rica in the last year is that 45 minutes can mean an hour and 45 minutes! I didn't think it would in this case, really; BUT I was in no mood to find out.

So, he told us to take the forms to the post office desk down the way a bit and they would arrange to mail them to us. We thanked him and left, glad as hell to be out of that waiting room finally and have our documents in hand, well the receipts for them, anyway.

Our assistant was there waiting for us and helped us get the ID's sent to us via the post office in San Ramon. Then she wanted to take a picture of us and I said sure and she took them. I realized later that she almost certainly thought we weren't appropriately "celebratory" about it when we got approved and got everything done and she was taking the photos.

She said "Most people want to wait around a little extra and get their ID's in hand instead of having them mailed."

I said, "I know, and I would like to get them; but I just don't feel like waiting around here any more and I want to get back and drive home before it rains too bad. We live on a dirt road which can be dangerous in the rain."

I didn't even know just how true that was, at that time!

So our Costa Rica Residency final appointment was not the happy fun time it might have been... But we were certainly glad to finally be Costa Rica Residents - legally - and to be getting our DIMEX cards in a few days! Happy that nothing went wrong in the whole long process and now it was basically over!

If you are thinking of moving to Costa Rica and want to find out more, click on this page: Costa Rica Immigration.

So then we got out of there and as she was driving us back to the bus station we saw the freeway heading back home completely backed up! It was backed up about 5 miles or so. She said surely there had been an accident on the freeway and it would be backed up for quite awhile. Then I could see that this trip into San Jose for our last Costa Rica residency appointment was not going to end without some hassles. And this was just the beginning...

So we changed our plans and went to San Jose and ate first, then got in a taxi to the bus station, thinking the accident would be cleared and there'd be less traffic now.

However once we got on the bus and started on our way home we soon saw that the traffic was still very very slow.

Took us TWO hours to get home instead of one, and my ass was sore from the lousy bus seat, I was hungry, had to pee, and was sleepy. To make it all worse the rain was fogging up the windows so we couldn't see anything at all, and we couldn't open them or we'd get wet. So it was like riding in a sauna for 2 hours. No visibility, just fog.

So now, after all that, is when the real fun began...

We finally arrived in San Ramon and it was pouring down rain.

We walked to our car in the pouring rain and then I began to drive home.

I had trouble seeing the road due to the hard rain, and when we got to our dirt road which we have to travel quite a ways on, it was super slippery, puddles everywhere and when we got to the worst part there were trees and limbs down in the road in several places.

The water was almost up to the top of the road at one bridge, and with the rain beating down on my windshield it was hard to see where I was going as I dodged tree limbs and tree trunks in the road.

This was exactly the stressful situation I wanted to avoid when I said "We'd better not wait for our cards, we'd better head back home before it rains!"

Then suddenly we turned a corner and an electrical cable had come down and was hanging so low it nearly hit our car when we passed under it. The road was so slippery with mud even my 4 wheel drive was slipping a little and I began to wonder if we were going to make it home or if there'd be a cable down or tree trunk across the road before we got there. It was pretty scary. Worst rain I've seen here yet and the road was the worst I've ever seen it.

We made it home, safe and sound finally. But the usually dry quebrada under our driveway was flowing like I've never seen it and our driveway had big channels of water on both sides making it much narrower than normal. Hope nothing clogs the cement "cantarillas" (big round cement tubes for run-off water to be channeled through) we have for water to pass under the driveway or we could have a big problem, as we've been home now several hours and it has not let up at all with the rain, and our caretaker told us that it's been raining like this ALL DAY! "Impresionante" was his description. And "Demasiada!"

So here it is 7pm, I'm finally showered and now going to eat something. Had to sit down for awhile and relax by writing this... Hope it stops raining soon or else who knows what could happen. Maybe we'd better start to build an ark!

Super glad to be home and that our house is not leaking anywhere!
p.s. The next day we were told that the road had been closed just minutes after we drove up, having been declared too dangerous to drive on! We were lucky to get through and to get through safe and sound.
So that was the stressful - yet lucky - ending to our Costa Rica Residency journey!
For our recommendation of a Costa Rica Residency attorney who will hold your hand every step of  the way, please subscribe to this blog and let me know you're subscribed and add a comment in the comments section below and I will contact you to give you the info.
Note: we do not spam nor share your address with anyone!

Thanks for reading my blog post on Costa Rica Residency on my Moving To Costa Rica blog!