I have been driving Costa Rica now for about 6 months and I have learned enough about it to want to pass on some tips, advice, warnings and opinions about it to my readers who may end up driving here at some point. 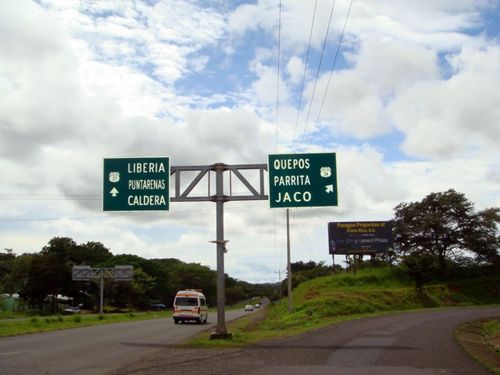 Driving Costa Rica Can Be Dangerous

I say these things not to scare you away from driving here or to make you not want to visit or move to Costa Rica (we moved here and I’m glad we did!). But I want you to know that it is challenging to drive here and that it can be quite dangerous, and the only way to protect yourself from the dangers is to be aware of them and drive very defensively and cautiously. When visiting driving a rental car can give you many advantages such as being able to stop wherever you want and go at your own pace, and get off the beaten path. (Here are some recommended places to drive to if you do decide you are up for driving Costa Rica.)

Where shall I start?

Signage here is very bad. Many times there is no sign telling you where to turn on a major road that goes where you are going. This is not that dangerous, just annoying. What is dangerous in respects to signs is that signs like “Un Via” (one way) and Stop and No Right Turn etc are not always easily visible like they are in most towns or cities in the USA. You have to LOOK FOR THE SIGNS and they may not be where you would expect them to be. They might be higher or lower than you would expect; they might be closer to the intersection or speed bump or whatever than you would expect, they might be smaller than expected, etc.

So RULE #1 RE DRIVING COSTA RICA:
DON’T EXPECT SIGNS TO BE WELL POSTED OR EASY TO SEE. ALWAYS LOOK ALL AROUND YOU FOR A SIGN WHEN YOU APPROACH AN INTERSECTION.

Where we live there are signs that stay STOP on the side of the road at an intersection. However, there is also a signal at that intersection and when the signal is green you are not supposed to stop! Why is there a STOP sign, then? They simply have not bothered to remove the stop sign since installing the signal! “Oh, they just installed the signal recently?” No, it’s been there for many many months. They have no intention as far as I can see of ever removing the inaccurate and possibly dangerous sign that says for you to STOP even at a green light.

See what I mean? That’s just one example. Often times there are NO signs that say a speed bump is coming up, even though that speed bump may be high enough and severe enough to screw up your car if you go over it too fast. So what do you do? You have to watch for them in the road ahead of you. That’s all you CAN do!

Many times there will be a place to pull over … but no, they won’t do that. They’d rather just stop in your lane and block traffic.

This is dangerous, of course, because they may give no indication they are going to stop. And they may stop in an area where there’s lots of oncoming traffic in the opposite lane so you’ll have to pass, say, on a blind curve or hill to get around them.

RULE #2 re DRIVING COSTA RICA:
EXPECT THE UNEXPECTED AND ILLOGICAL!

Another problem driving Costa Rica is that you have to really watch out for pedestrians and bikes and motorcycles more than in the USA.

I don’t know if it’s the same all over Costa Rica (I suspect it is) but pedestrians have no respect for the road or cars. They expect you to not hit them even if they decide to walk down the middle of a road, 3 abreast with children. This sounds incredible to us, and I often shake my head in disbelief how they can surely hear my car coming but will just continue walking IN the road instead of getting over to the side where it’s less likely that I or someone else might hit them.

We have seen 2 year old kids sitting in the road, several feet into the road, while the mother sits near her, as several people sit in a circle talking. Could they sit somewhere else? Yes. Is there a good reason for sitting in the road where someone could hit them? No.

On our country road we have seen teenagers park in the road (not to the side but right in the road), then sit on and around the car, and even lie down IN the road BEHIND the car where if you came upon them suddenly you could run them right over! Incredible but true.

Ticos seem to have no concern about anyone hitting them and expect that you the driver are always looking out for them no matter how unsafe they are in the way they walk, sit, stand – and yes, even lie down! – in the road.

So, RULE #3 RE DRIVING COSTA RICA:
WATCH OUT FOR PEDESTRIANS

This is the most incredible of all and it relates to #1 about Signage but I am giving it it’s own paragraph because it is so insanely dangerous!

It is this: the government here – the government body that controls highway safety – (If there is even one! Sometimes I wonder!) –  is so lax and irresponsible that they will actually do things that make driving more dangerous than it already is!

A Tico friend of ours was driving his motorcyle the other day and came upon road work where the highway workers were letting through traffic a few vehicles at a time, first one direction then the other. They motioned him to come ahead where he had to drive down a one lane only stretch of road for 100 meters or so. As he took his turn he suddenly saw a huge truck coming towards him in the one lane! Luckily he was on a motorcyle and not a car, so he was able to swerve around the truck in the one lane and not get smashed to smithereens.

This points out the rule: Drive Defensively At ALL Times, even when you might expect that it’s completely safe to relax a little.

Another example, and this is the most dangerous thing I have ever encountered here in Costa Rica, and it was caused by the “highway department” themselves:

We were going to Arenal Volcano for a vacation and were driving the major highway that goes there, 20-25 km north of San Ramon. Suddenly we came upon cones in the road. The cones were not tapered from a distance to show an approaching obstacle. No, they were just suddenly placed smack dab in the road, taking up our whole lane, covering the paint they had recently put down saying in large letters “35 kph” as we approached a curve to the left.

So imagine: you are driving along on a curvy road and suddenly, without warning, you come upon traffic cones blocking your lane – no warning ahead of time, just BOOM! Lane blocked!

You pretty much slam on your brakes and go “WTF?! What do we do now?!”

Here’s the kicker: Going around the cones into the other lane is not an (good) option. You’re on a blind curve and you can’t see if anyone is coming towards you or not in the lane you’ll have to move into to get around the cones!

Should I go THROUGH the cones? Well, maybe, but if I do, the cone may get stuck up under my car or something? Never having gone through / over cones, we were not sure about this option.

Later, I decided I should have taken the option of going through the cones. But in the moment, I decided to take my chances and go around the cones into the other lane and hope there wasn’t a car that was going to smash into me!

As we continued on up the road there were about 4 more of these cone blocks covering recent paint in the road and each time we took our chances and got through them. Looking back, as I say, with 20/20 hind-sight, I can see that I should not have done it. I should have gone THROUGH the cones and then checked as soon as there was a safe place to pull over, to see if I had a cone stuck under the car. But having never encountered this problem I made a snap decision and now realize it was a stupid decision that could have cost us our lives. One of those things that when I look back I go “What the EFF was I thinking?!”

Anyway we made it but this is the single most stupid thing I’ve ever seen highway workers do, as it clearly was dangerous to anyone who was driving north to Arenal Volcano that day!

So the next RULE #4 re DRIVING COSTA RICA IS:
DON’T TRUST THE HIGHWAY DEPARTMENT HERE TO KEEP YOU SAFE!

Be ever prepared for Danger even when the highway dept. workers are supposedly placing warnings or directing traffic in your best interest!

Last but not at all least is this:
Trucks in Costa Rica are transporting heavy materials and are often doing so on narrow, curvy roads. Because they are BIG trucks they will often almost HAVE to come into your lane when they come around curves. At least 5 times I have seen trucks coming toward me in my lane on a curve, and twice it scared the living S**T out of my wife and me and we counted our blessings that we were still alive after a truck almost ran into us head on.

This is also another reason to NEVER PASS ON A DOUBLE YELLOW LINE. Double yellow lines are there for a reason – warning you it is unsafe to pass because it is a hill or a blind curve or etc. Believe me I’ve done it a few times, and I regretted it as I nearly got smashed like a bug by a huge oncoming truck.

So no matter how slow the truck or tractor or whatever is going in front of you and how big of a hurry you are in, do NOT pass if you can not CLEARLY SEE for 1/4 km or so in the distance that no oncoming traffic is heading your way!

And even when you’re safely driving in your lane, be defensive in your driving and drive slowly around curves because a truck could easily be coming into your lane towards you.

So this is the MASTER RULE for DRIVING COSTA RICA:
ALWAYS DRIVE DEFENSIVELY BECAUSE THERE CAN BE DANGER AT ANY MOMENT!

I don’t mean to discourage anyone from vacationing or driving Costa Rica, I just want to warn you that driving here is NOT as safe and easy as driving in the USofA. I don’t have experience driving in other countries other than Costa Rica and the USA so I cannot address what it’s like driving in Europe or Canada or etc.. But here in Costa Rica driving is no picnic. You MUST BE ON YOUR TOES when you drive here!

If you have comments or other warnings or advice or stories re Driving Costa Rica please share them in the Comments section!