We got up early of course and today was the day we had to "check out" of our rental on  the north of town to move into our close-to-our-land rental. So we spent the entire morning getting our stuff ready to move amd cleaning up the rental.

Then we took the back road to our new rental because we didn't know if our horribly weak 4x4 Daihatsu Terios would make it up the hill going the short way.

Although I've gone the back way several times and never had a problem, today I got lost and it took us almost an hour to get there. This was unfortunate because yesterday Yoli was in charge of talking to people who called us back about the cars for sale, and she arranged for us to go to the airport at 1pm to see a 2002 Galloper that was going for the same price as a 97. I didn't want to do this  because I "felt" that it wouldn't be a good deal - "if it sounds too good to be true, it probably IS" - and I hate driving anywhere towards San Jose.

But she decided it was a good idea and talked me into it and in the end I capitulated because I could see that it COULD possibly be a good deal because the guy's story was that he was selling it because he needed to leave the country soon as he was emigrating to the USA and so needed to sell the car.

So we dropped off our stuff at the new house rental - which isn't finished being furnished yet - and headed to the airport. We were running late and it poured down rain and we got behind tons of slow trucks and the trip was pretty much a nightmare because of all that.

Long story short, after taxistas (taxi drivers) made us move from where we were parked, we went over to a Denny's parking lot and looked at the car which turned out to be a 98, not a 2002. As I drove the car and talked to the guy who owned it I realized that Yoli had made a mistake and made us an appointment at the airport with people who had a 98 not a 2002 and had I known that I wouldn't have come.

Then as I was driving the 98, I got a call from a guy who said he was meeting us in San Ramon to show us the 2002 - and he was there but wanted to know where we were. When I got back to Yoli who was waiting back by our rented car, I told her to call the guy and it turned out he was the one with the 2002 and he had arranged to meet us in San Ramon but we had totally gotten mixed up and forgotten about the appointment. I'm not sure I even knew about it but if I did I forgot, as did Yoli who made the appointment.

He wasn't mad - as I would have been - and said he'd head back towards the airport and meet us at the restaurant where we were now going to meet him.

We grabbed some food at the Taco Bell - which is HORRIBLE here; I'll write my review of Costa Rica's Taco Bell later - and then he called and we met him at the Denny's parking lot. As it turns out his 02 was older looking and more beaten up and drove worse than ANY of the 97's and 98's we looked at. So we politely blew him off and went back to San Ramon, called the guy with the Galloper from the first day, who we'd negotiated with last night, and made one last negotiation and asked him to meet us at the mechanic's to check it out.

He agreed and we met at the mechanic's but he said it was too late now and he wanted to do it tomorrow. We agreed to that and so that's where we stand.

IF the car doesn't pass his test, then we will have to start looking all over again, which we cannot afford to do at $70-80 a day car rental. I can only hope it does pass because we simply cannot afford to keep renting this car!

This is of course stressful, thinking that I am paying $70-80/day for a car, and finally after deciding on this car, what if it doesn't pass the test and we have to keep looking?? I don't know what we will do in that case. We simply cannot afford to keep looking!

Also everyone has an opinion:
"Don't buy a Galloper!", "Don't buy an Isuzu!", "Buy a car with a great interior because that means it was well taken care of and will be easier to re-sell!", "Don't worry about the interior or appearance, just buy a car that is sound mechanically!" (This is my philosophy and opinion.)...

But so far no one has shown us any car that drove well or seemed powerful enough to make it up our steep rocky slippery hill except this one 97 Galloper.

So anyway we made an  appointment for the mechanic to look at it tomorrow and if it passed his tests we will then arrange to buy it. But buying it will no doubt take 2 days (to wire the money into his bank from ours in the USA) and so we'll still need this rented car for a couple days more! UGH! It SICKENS ME to throw all this money away on a rental car!

So after all that we come back to spend our first night in our new house rental.

It's an okay house but nowhere near as nice - inside - as the one we've been renting since we got here. Unfortunately that one is 30 min. away from our land and this one is 3 minutes away! 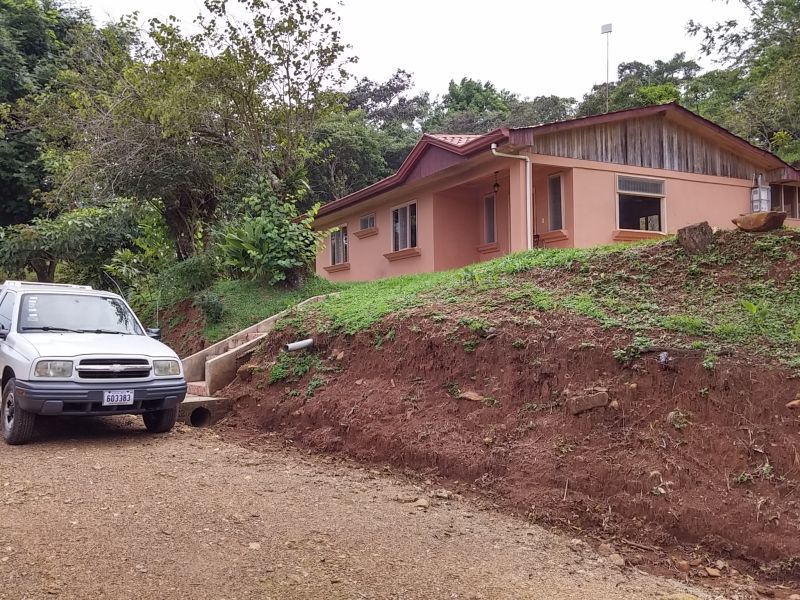 On the bright side, it's big, it has internet (!!!), and has everything we need. Worth $500 a month? Probably not. But the advantages of it being close to our property makes it a slam dunk!

Tomorrow we get up, go up to our place and see the progress, (walls were supposed to go up today!) and then go to check out the car around 1pm. Then If it passes the muster we'll try to start with the bank transfer and then see how soon they can get it done. I might be able to make the transfer into my attorney's account and then as soon as he sees it there he could transfer it quickly into the car owner's account for me, to save us a day so we could return this piece of shit expensive rental car!

So with some luck maybe in a day or two we'll have a car of our own finally!

Posted in Moving To Costa Rica